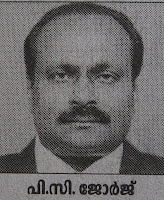 A tribute to Mr PC George
Mr. PC George (1943-2011)
Mr George, a good friend and one time Director of Mining and Geology Department, Government of Kerala died, after short duration of breathing difficulty, in the early hours of May 15, 2011, in his apartment at Trivandrum. His wife Ms. Valsa George alone was near him as the couple was settled in Trivandrum and their only son works in Canada. The final rites and burial will take place only on Wednesday (18th May). As a fellow geologist and friend, and class mate and his teacher for a brief while, I wish to record a narrative of our knowing and the friendship we nourished and cherished.
I met this fat, rounded (must have been around 55-60 kg,), rather short young man with dark skin and thick head of hair oiled and combed backward, that day in 1960, when we (the prospective students of Geology class of 1963) in front of Principal’s office in the University College. George always wore neatly pressed dhothy and full sleeve shirt but the sleeves rolled up halfway. I recall that he was accompanied by a man in his second decade (Mr. Tharyan, elder brother and now no more). But I had my dad to escort. Though it was all new things for dad, Mr. Velappan Nair (typist in the college and a cousin-in-law) acted between my dad and office to make things less cumbersome for my dad. The admission process was very brief. The aspiring student escorted by parent walked into Principal’s office, where the HOD of Geology Department Prof. K.K.Menon was also seated. The Principal (Prof. VR Pillai, Professor of Economics) asked for some biographic details, and advised each student to perform well in the studies so that it will be rewarding to the college as well as parents. This followed the verification of certificates. After this session, it was fee remittance for which Mr. Velappan Nair helped by jumping the que from inside of the counter. All the boys went through it and finally we parted, with the fond hope of going to the degree course.
On the day of reopening, i.e., July 1st or the first working day of July ( it was 1st July, 1960) we all gathered sufficiently early in the college campus and started the initial ritual like knowing each other and striking friendships and of course gazing at the good looking girls. It was a mixed college and that was part of the thrill. Our geology teachers systematically dissuaded girls from joining the course. This was the policy of the teachers in Geology. Our class was 14 strong all boy’s troop. All of us were very good in their own chosen ways. Some worked hard studied the lessons and completed the assignments on time and earned good grades and final grade at the final examination.
Ramachandran, Krishnamoorthy, Bhaskaran Nair and I went ahead for the MSc degree. George took time out to enjoy life and only later completed the M.Sc degree. Finally joined the Dept. of Mining And Geology as assistant geologist, where he held a senior place compared to me, where he continued and finally retired in May, 1999. May his soul rest in peace for ever.
thrivikramji@gmail.com