Home > Tributes and Rememberances  > Thiruvattar Balan Pillai and the Neovillupattu 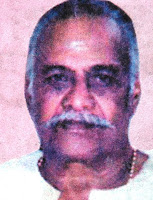 Thiruvattar Balan Pillai (1910-1992), the originator of Malayalam villupattu- more aptly called Neovillupattu, and its lead artist, worked for the Special Armed Police (SAP) force of erstwhile Travancore state and later Kerala. He joined the Police force, when the Travancore State’s army to which he belonged, was disbanded after Indian Independence.

Balan Pillai’s Neo-villupattu performance in scores of venues in the early decades of second half of the last century, still lingers in the minds of at least a small group of connoisseurs. In fact, many of the fans vanished from the earthly scene. On account of the glittering-stage-performance of the team and the story lines or themes that they chose to deal with, the Neovillupattu attained the status of a legend and heritage in the scene of Malayalam art and culture.

Balan Pillai created this stage show of the neovillupattu by refining or redefining the villupattu which is truly a group act or team show, native to the neighboring state of Tamil Nadu. Villupattu as practiced Tamil Nadu, is a dramatized performance by a team of say six or seven artists all of whom are seated on the stage and in two rows. The leader narrates a story of a king or Hindu god as answers to questions/comments made by one or other member of the team. The rendering both in verse as well as poetic prose, is very loud and lively. A turban and dhoti is the only outfit. Facial makeup basically was application of sandal wood paste on the forehead, upper arms and the chest.

The name villupattu originated from the lead instrument, the villu which is not shaped like a bow. Structurally, it is a long wooden pole of say 7-8 ft length, with a uniform cross section of 2.0-2.5” except at the ends, where firmly fitted decorative brass caps are drawn into eye holes facing each other. The rod is adorned with a set of tight fitting brass rings (placed at uniform spacing), and drawn into eye holes to which are hung bunches of jingling bells and chilankas.

A word about Chilanka. It is a hollow sphere shaped casting in bell metal, partly filled with half a dozen or so metallic balls, larger in size than the narrow slit at one end and like in a bell, an eye hole at the opposite end to enable secure fastening.

During the concert, team members sit in two rows – one behind the other, wearing only a costly head scarve and equally expensive costly mundu. In the front row are seated the leader at the right hand end, and the three other artists who literally support the Villu, which sort of rests partly on the neck of a large-fired-mud-pot (about 18” in dia. and whose mouth faces the artist) placed roughly at the middle and at the firm grip of hands of one or two artists seated to the left. The leader readies the villu by tying a fine rope to the villu and the other end to one of the big toes. The artist at the center and seated behind the large red pot, uses a fan cut out of leaf-petiole-sheath of arecanut palm, to rhythmically beat on the mouth of the pot to make a deep bass sound..

Villlu is readied for concert, by tying-taut a rope between the ornamental-brass-ends. The leader also has a pair of special wooden-needle-like-drumsticks of about 15” long and crafted and decorated fashionably with clasps, highlights and trims of brass. Each stick is fashioned by turning in a lathe like machine and the finished needles are driven more than half way through the center of split-hollow-spheres of brass before attaching clasps for the firm grip and trims at the tips.

The team leader holds the drumsticks by the clasps, and rhythmically hits the taut sting and the villu, to make the bells and chilankas jingle loudly. Maestros like Thiruvattar Balan Pillai, will juggle the sticks skillfully and artistically keeping the audience spell bound. In fact, the audience in the dim light will not miss the reflective brass in the bright stage lights or the costume adorning artists of the team or their facial expressions.

The theme of the first neovillupattu was the development agenda of the first five year plan. As the trio of Mannathu Padmanabhan, makkappuzha Vsudevan Pillai and MP Manmathan, was depicted in the story, naturally, Pillai received special the accolades.

The story of “Velu Thampi Dalava” took Pillai’s team to the peak of honour and popularity in the state. Yet another equally powerful crowd catcher was “Kochu Seetha” Though, M/s KG Sethunath and KV Thikkurisi created the prose and verses of the story, it was Pillai’s tuning and narration style that took the neovillupattu to greater heights.

Biographic sketch of Thiruvattar Balan Pillai
Pillai was born to the couple Sri Chitharal Sankara Pillai and Eswari amma, in the village of Chitharal, on the right bank of Kuzithura ar and 4 km south of Arumana and about 4 km westerly of Thiruvattar. Thikkurissi Sukumaran Nair, a famous cine artist of last century and a lad from the neighbouring village of Thikkurissi was a contemporary of Balan Pillai and contributed immensely in the neovillupattu venture.