Home > Tributes and Rememberances  > DOYENS OF GEOLOGY OF KERALA,I: I.C.Chacko 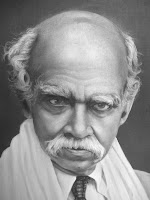 DOYENS OF GEOLOGY OF KERALA, I: Chev. I.C.Chacko, (1876 to May 27, 1966) The State Geologist, Director of Industries & Author (A brief biographic sketch) The need for profiling of mineral resources of Kerala is ancient and classical as the days of sovereign state of Travancore- the present core of Kerala state. A quick scrutiny of the accessible records of the state concretely vouches for the mineral inventorying activities carried out by the state Geologists like Chev. I.C.Chacko (under aegis of the Industries department and in the absence of a separate Department of Mines and Geology). Chev.I.C. Chack was borne in 1876 in Pulinkunnu, Kuttanad and had his early education in Govt. English High School Alappuzha (1887-93), and followed by St. Ephrems High School Mannanam,(1894-95). Immediately after school, he joined “Deepika” as sub-Editor, Deepiksa (1894-95). Later he moved to Trivandrum for studies in the HH the Maharajas University College, Trivandrum (1895-99) where he studied also Sanskrit as one of the language courses. On graduation from the college, Mr. Chacko had a short stint (1899-01) as the Headteacher, Leo XIII High school, Alappuzha, In the following year, quest for higher education took this young man to the Imperial College of Science and Technology, Univ. of London (1901- 1906) and studied Physics as one of the subjects. He also qualified to be an Associate of Royal School of Mines, 1906. On his return to India and Travancore, Mr. Chacko was appointed as the State Geologist, Travancore state (1906-31) and finally elevated to the position of the Director of Industries in 1921, and continued in the position till 1931.

Geological Magazine (Decade VI), Volume 3, Issue 10, October 1916, pp 462-464 a renowned journal carried a research article by Mr. I.C.Chacko On Cordierite from Thiruvalla, which later became a highly researched topic in Kerala Geology. The abstract of this paper is as below. Cordierite was first found in Travancore at Teruwulla (lat. 9° 22′ N. and long. 76° 37′ E.) in a kind of diorite. In the hand-specimen the mineral appears as violet patches and spots. Monazite, magnetite or ilmenite, garnet and biotite with probably a little hornblende, occur in association with it. In the sections the mineral is found to contain numerous globular inclusions which are surrounded by pleochroic halos. The larger of these may be identified as monazite under the microscope. The mineral is itself pleochroic, light vibrating in the direction of the axis of mean velocity (Y) showing a pronounced violet tint. When light vibrates in other directions the plates do not show any distinct colour, but a faint yellow tint may be observed in some plates. When light vibrates in the direction of the Y axis the pleochroic halos round the inclusions disappear and assume the violet tint of the crystal plate. Cordierite is supposed to occur usually in metamorphosed sediments, and the pleochroic halos are regarded as due to the presence of organic impurities. But a sedimentary origin is out of the question in the present case. It is held by some that pleochroic halos are due to the presence of radio-active substances. I kept an Ilford Empress photographic plate exposed in a dark box to a crushed sample of the mineral for more than twelve hours, but on development the plate did not show any indication of having been affected by the mineral. In addition, Chev. I.C. Chacko was a great grammarian and much respected linguist. His 1956 publication “Paniniya Pradyotam (Light on Panini’s grammer) earned him the Sahitya Academy Award. The Kerala Shaithya Academy also had instituted a I.C. Chacko award in his honour to be given away to a creation in Malayalam and falling under interest Mr. Chacko. In the later years of the Travancore state and founding of the University of Travancore (1936?), but in the colonial days, a Division of Mineral Survey & Research wing was founded to further the mapping and research on the geological resources of the state, while the dutuies of exploration and licensing vested with the Department of Industries, which later evolved into the Directorate of Geology – an independent entity under the government. The Division of Mineral survey and research that continued in the University of Kerala (founded in 1957?) by June, 1963, transformed itself to the present Dept. of Geology, University of Kerala. This year, the Department plans to hold a scientific session/s to commemorate one of the early fathers of geological profession in the state: