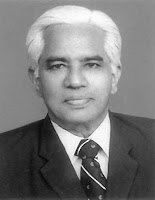 Doyens of Geology of Kerala- III

Vadakkethu Chacko Jacob (born on May 12, 1929) of Kuriyannoor, Thiruvalla (Kerala), after completing School education locally, enrolled in the Benares Hindu University to finally earn the degree of M.Sc (in Geology) in 1952.

Subsequently Mr. Jacob, served the Sereguddin & Co as a geologist (from November 1952 to October 1953) in Keongjahar District, Orissa, to help the company in establishing an iron ore mine and also carried out geological field investigations in the adjoining districts for locating commercial iron ore and chromite deposits.

Later, in October 1953, Mr. Jacob joined the Geological Survey of India as a Geological Assistant, and worked initially in the petrological laboratory. As part of the GSI’s exploration work, he assisted his senior colleagues in exploratory drilling operations in the coal fields of Bihar, to locate and assess the underground coal seams.

Mr. Jacob’s promotion in Oct. 1954 as Assistant Geologist and posting in the Ground Water Division of G.S.I to work in Ferozpore District of Punjab (till March 1955), offered an opportunity to take a closer look at the problems of water-logging, caused chiefly by surface water irrigation in the district. In the years that followed (i.e. till 1960), he was associated with the exploratory drilling under Ground Water Exploration Programme in the Narmada and Tapti valley alluvial tracts, as well as in parts of the states of Maharashtra, Madhya Pradesh, Bihar, Uttar Pradesh, Punjab and Haryana.

On promotion as Geologist (May 1960), Mr. Jacob continued to serve in the Ground Water Exploration Programmes of GSI in Saurashtra and Gujarat regions. He also worked in the hot spring areas of Bihar during this period. Till 1962 he was attached to the GSI headquarters in Patna, in the Bihar Circle. Systematic geological mapping of the Bhagalpur District of Bihar was one of his notable contributions during this period.

In November 1962, Mr. Jacob, on promotion as Senior Geologist, was posted in the newly formed Kerala Circle of GSI, at Trivandrum, along with other senior officers, viz., Dr.M. R. Subramanyam, T. M. Mahadevan and K. V. Poulose. During the tenure in the Kerala Circle (1962 to March 1969), he was associated with the systematic geological mapping of Quilon District. Other contributions of V.C Jacob during the period included the geological study of Mica Belt of Punalur, mapping and exploration of graphite resources of Vellanad area of Trivandrum District, and demarcation of semiprecious / gemstone belt occurring in the Taluks of Nedumangad and neighbouring ones in the Trivandrum District. Yet another remarkable contribution of V.C Jacob during this time was the indisputable identification of rock types, referable to the Khondalite Group for the first time in Kerala.

There was a climatic extreme, i.e. a severe drought situation, during April 1969 to August 1969 all over India, and V.C Jacob was called back to the Ground Water Division of GSI. During this time, he carried out the ground water survey of Kasaragod Taluk of Kerala. Soon afterwards, a separate Ground Water Division was established in Kerala and he carried out ground water mapping of the state, along with a couple of officers. Ground water survey of the entire Lakshadweep Group of Islands during 1969-71 was another commendable work of Mr. Jacob.

From March of 1971 till 1975, Mr. Jacob, on deputation to the Kerala State Government service as the Chief Hydrologist and in the newly established Ground Water Department, organized a laboratory, procured drilling equipments for exploratory work, designed a technical program for implementation, and above all recruited and trained a number of junior officers as hydrogelogists. The immediate outcome was exploratory drilling, development and construction of numerous tube wells in state government farms and for farmers, who badly needed to augment their available water resources with ground water.

In 1975, Mr. Jacob assumed charge of the newly formed Kerala unit of CGWB, in Trivandrum. In the same year, on direction from New Delhi, Mr. Jacob went to the Maldives to study and assess the ground water conditions of a number of islands and recommended rainwater harvesting programmers to meet their mounting water requirements. On conclusion of this assignment, he continued to serve in Kerala till 1977, with ground water programmes and training a number of junior officers.

In 1977, Mr. Jacob was deputed to WAPCOS (Water and Power Consultancy Services), Government of India. In April 1977, he was deputed to Nigeria for a period over five months, to carry out ground water investigations in the three states of that African country. He, in that capacity, advised the Nigerian government on the construction of tube wells, as an effective solution to overcome the severe problems associated with drinking water scarcity.

Later, he was posted in Hyderabad, as Regional Director of CGWB (Central Ground Water Board) and during this tenure Mr. Jacob guided and oversaw the departmental activities of CGWB in the four southern Indian states.

In April 1980, Government of India selected Mr. Jacob for an assignment in Philippines, to study the ground water conditions of the Mindanao Island, and make technical recommendations for more scientific groundwater development programmes.

Mr. Jacob came back to Kerala for another term (May 1980 to June 1983), to be in charge of the activities of CGWB and to train a number of new junior officers. Afterwards, he paid an official visit to Sweden, where he held discussions with the professors of Royal Institute of Technology, Stockholm and officers of the Swedish Geological Survey, as well as toured to various places in Sweden to study geology, and various activities connected with the groundwater studies of that country. From November 1983 to June 1988 he was engaged in the study of various aspects of groundwater in the southern half of Kerala State, in collaboration with SIDA (The Swedish International Development Agency), covering exploration, drilling and appraisal of groundwater potentials and aspects of groundwater pollution, etc.

Mr. Jacob also served as a member of Kerala State Committee on Science and Technology from 1982 to 1987. He had helped ISRO in developing their water resources at their different laboratory complexes, like at Valiya Mala, and later at Mahedragiri near Kavalkinaru (in southern Tirunelveli Dist, Tamil Nadu) – a hard rock terrain which now houses the Liquid Propulsion Systems Centre, an integral part of Indian Space Research Organisation (ISRO). He undertook the preliminary geological studies of Kudamkulam, in the same district, where the construction of a Nuclear Power Station is nearing completion.

Mr. V.C. Jacob retired from the CGWB in 1989 and presently lives in Trivandrum (Kerala), with his family.