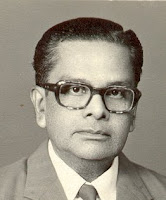 This year (2003) is very special to geoscientists (whether they be in academia or in the professional outfits under the union or state), in that it was in 1953 June, a relatively young and US educated (Yale University, New Heaven, Connecticut,USA) Prof. K.K. Menon, enrolled the first batch of B.Sc. students in the erstwhile Maharajas College (now the University College), Trivandrum.

Before coming over to the Geology Dept in the University College, Prof. Menon was the Chief of Division of Mineral Survey and Research of the Central Research Institute of theUniversity of Travancore. Sri (late) CV Paulose, K.P.Ramachandran Nair and Shri K.V.Krishnan Nair also served in the Division of Mineral Survey for varying terms and capacities.

Prof. Menon continued to preside over the Geology Department until June, 1963 and then moved over to the Department of Geology of the University of Kerala, built on the core resources of the Div. of Mineral Survey and Research, which till then had the stewardship of Shri.K. V. Krishnan Nair.

Prof. Menon retired as the founder professor of Geology, in the University of Kerala in Oct. 1979. He was a founder member of the Geological Society of India (Bangalore) and the Mineralogical Society of India (Mysore). In addition, he also served in the various academic bodies of this university and others in the states of Tamil Nadu, Karnataka and Andhra Pradesh Prof. Menon also served as the Dean, Faculty of Science of the University.

During his long tenure as an educator and educationist, several scores of students benefited from his personal disposition, reputation and scholarship; innovative teaching style and unceasing and sincere encouragement he offered to his students. Many of his students have reached the far corners of the world in both hemispheres, as well as in the senior echelons of the professional and administrative pursuits.

Prof. Menon’s primary research interest was focused on the recent and modern sediments of the southern Kerala and parts of Tamil Nadu. Even in the early fifties he had focused on the signatures of paleoclimate from the attributes of sediments, i.e., Teris. His contribution in the area of low temperature Geochemistry of Pyrite as well as stratigraphic relation of the Quilon and Warkalli series, though seminal in character later spawned new ideas like two periods of lateralization.

After retirement from the university service in Oct.31, 1979, he followed a lifestyle amply fitting a contented and scholarly person, leaving the geological arena to the younger generation of professional and academics. He passed away after a brief illness in10-6- 1998. He is survived by his wife and two daughters and a son and several grand children..

I am sure that the venture by GOSAN to organize biannual commemoration lectures by eminent geoscientists bears fruit in some moments from now. Our distinguished speaker is a very well know son of India, Prof. T.M.Mahadevan, Director (Rtd.) Atomic Mineral Division, and Government of India.

Served as Dean of faculty,